Product How it works Device Methodology F.A.Q. Blog
Feedback. How to get out of overtraining and get in shape with Engy Health
Back

Igor Kurtepov, an ultra-runner and triathlete, an ultra-long-distance sports coach and the author of the healthy lifestyle blog Begoman, talks about how to regain shape after getting into the overtraining zone and avoid similar mistakes in the future using HRV

I, Igor Kurtepov, founder of the running school and club Begoman. Since 2013, I started running, triathlon, covered the classic triathlon distance four times, similar to IronMan, and won the Moscow Region Championship in daily running. In 2017, I took third place in the self-overcoming daily race with a score of 211 km per day. In 2019, he received the GRUT T100 silver buckle in the 108 km trail race. This year one of my students won the Russian Cup in daily running and fulfilled the Master of Sports standard with a result of more than 247 km per day. Running has become my life's work: I dedicated my blog to running and a healthy lifestyle YouTube, Instagram и Вконтакте.


As a coach and athlete, I need to monitor the state of my body and my students on a daily basis in order to choose the right load. Too intense and too frequent training leads to a state of overtraining, and underloading prevents you from reaching peak shape. Therefore, objective control of the body's work is important, since internal sensations do not always tell the truth about an athlete.

With Engy Health, I can see my heart rate variability (HRV) readings on a daily basis. This allows me to understand whether today my body, or the body of my students, is ready for an intense load, or is it better to do a recovery training. Such an approach in making decisions on adjusting the training plan, depending on the current state of the body, allows the best and fastest way to gain sports form, to reach the peak of form before the competition.

Yesterday it was early, tomorrow it will be late!

There is no perfect workout plan that fits everyone. We are all different, and what works for an Olympic running champion will not work for an office worker with low physical activity. Most people involved in sports are somewhere in the middle, and each of us has our own individual norm of physical condition. Moreover, this rate can improve or worsen on a daily basis, depending on the circumstances (duration and quality of sleep, stress at work or in the family, diet, etc.). If we do not control these changes within the framework of our individual norms and do not take them into account in training, then we run the risk of earning "overtraining", and instead of the expected start, we end up in a hospital.

What are the main differences between the athlete's organism and the “white collar” organism? A person who regularly trains has higher hemoglobin (usually closer to the upper limit of the norm), a higher density of mitochondria, hypertrophied heart - an increased volume of the left ventricle, more developed capillary, which allows for better nourishment of muscles, etc. For a comprehensive assessment of the body parameters, instrumental medical studies are needed, which are difficult and expensive to carry out on a daily basis.Often such studies are most likely within the power and resources of professional elite athletes, but hardly whether they are available to ordinary amateurs. 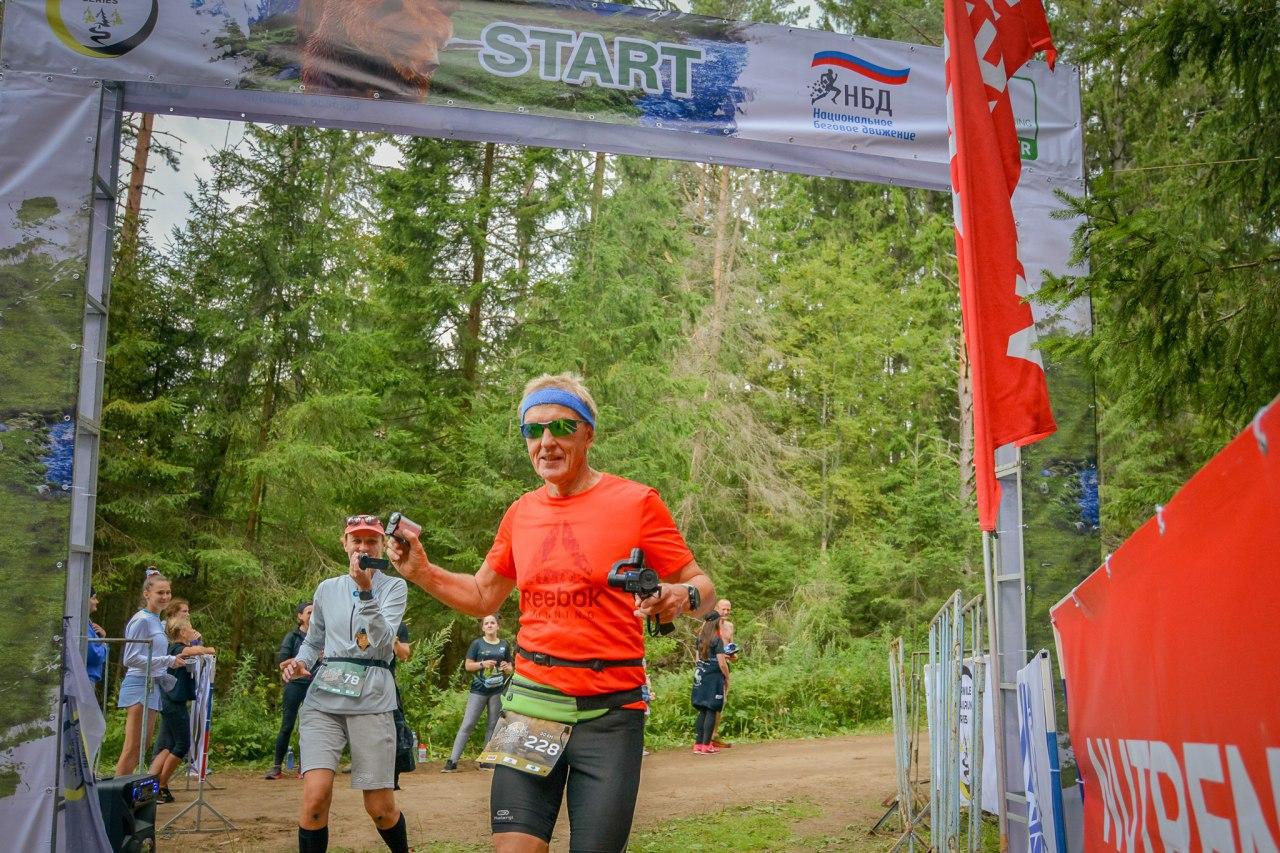 Nevertheless, the assessment of heart rate variability simplifies the task of complex monitoring of the state of the body. After all, initially HRV (HRV) was developed specifically for a comprehensive analysis of health and adaptation to the loads of astronauts before and during flight: when an astronaut is in orbit, he must be monitored, firstly, remotely and, secondly, using available data. which can be transmitted “to the ground” - the pulse of rest is among them. The technique proved itself later, in the 1970s, when it moved to sports medicine, where the tasks are similar: not to let the athlete's health “break down” in conditions of increased physical and emotional stress, while ensuring the maximum growth of sports indicators for competition.

Previously, HRV was inaccessible to a wide audience - a cardiogram could only be taken using special equipment, there were no computers and programs for HRV analysis in the public domain. And now there are numerous services and applications for this: I personally use Engy Health and am convinced of the effectiveness of this service.

How do I measure with Engy Health?

Using the HRV method, I take measurements once a day - in the morning, on an empty stomach, in a relaxed, but no longer half-asleep state: your body should already wake up, but not yet have time to strain to fix the state of the nervous system in a relaxed state. Ideally, it is better to take a measurement when you have already got up, went to the toilet and washed, but have not yet had breakfast.

You should always take HRV measurements in the same position, while breathing evenly, not moving, not talking, not swallowing saliva. To get a rhythmogram of the pulse, you need a heart rate monitor that is synchronized via Bluetooth with a smartphone, or order a special gadget on the Engy Health website Engy Beat. Measurement takes 5 minutes. For better measurements and better contact, I moisten my fingers with water, press the device to the middle of the chest with an end terminal, and clamp the right terminal with my right hand. There is another way to measure with the Engy Beat, when the two side terminals are clamped with the fingers of the left and right hand.

What HRV indicators do I study first of all?

The first thing I look at is the RMSSD score. It is an indicator of the state of the parasympathetic nervous system, which is responsible for the restoration of the body during sleep and rest. I also watch the pulse.

The body copes with the load if the RMSSD grows with the same load or is stable against the background of an increase in the load, and the heart rate decreases. And, on the contrary, if the RMSSD falls, and the pulse rises, then this means that the body loses its shape and cannot cope with the load.

It is important to understand that measurements in 1-2 days will not show anything. If one of the days some indicator went down, this does not mean that something is globally wrong. Perhaps one-time stress was to blame. The state in dynamics will become evident only over a long period of time. After 7 days of daily measurements, the Engy Heath application will show the RMSSD moving average, and after 22 days - the RMSSD personal norm corridor, that is, the average of the highs and lows. After a while, you will see the slope of the corridor and the moving average up or down: this will be your RMSSD trend. 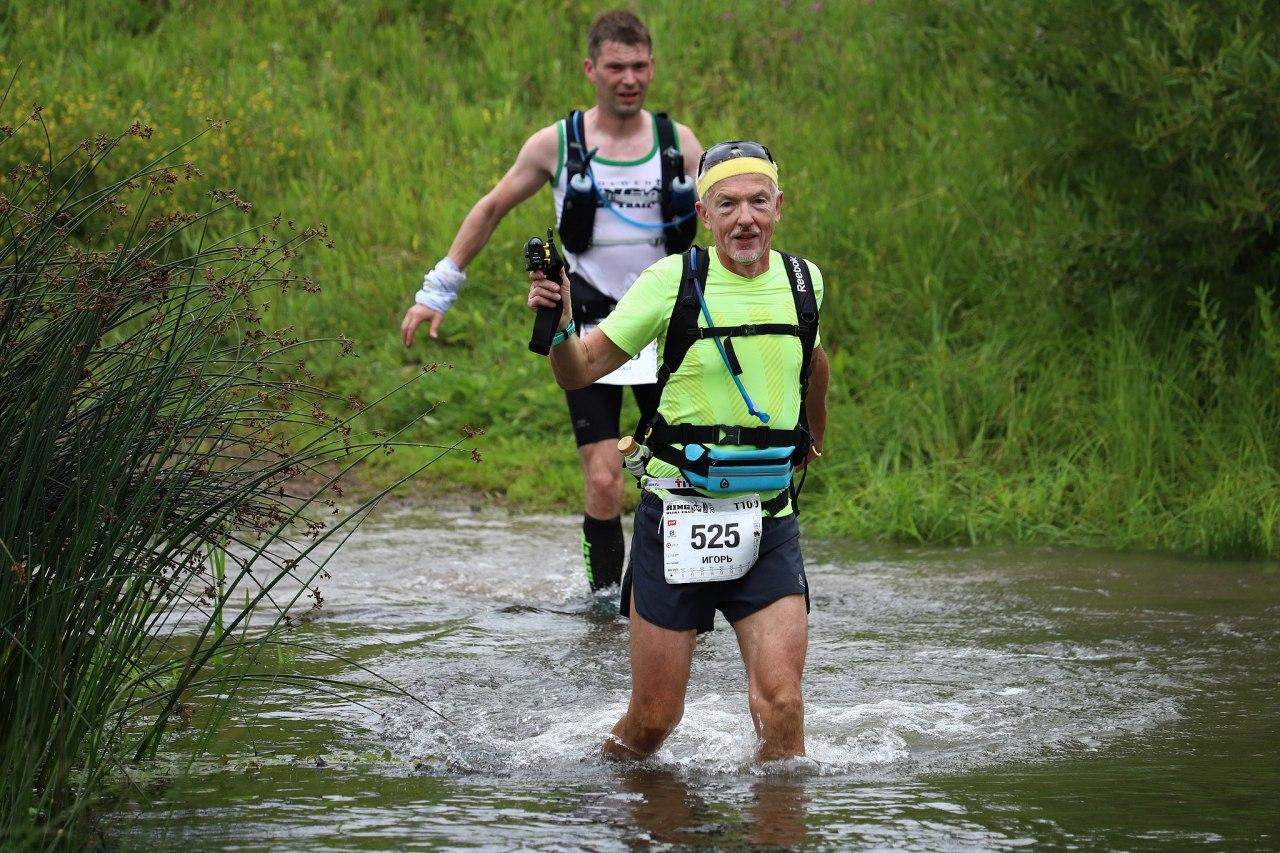 Why am I using heart rate variability?

Sports training is developing, toning and restoring. During developmental training, the body's resources are initially depleted, but then restored with a reserve. In this process, it is very important to keep track of the balance: do not allow yourself to relax too much to make progress, but on the other hand, do not go into “overtraining” when the body is overworked due to too much stress, when fatigue accumulates. This is especially true with age: the older a person is, the slower he recovers, the more difficult it is to get out of overtraining.

The HRV methodology, implemented in Engy Health, allows you to clearly track your load rate and do sports as efficiently as possible, without harming your health. Daily measurements reflect the body's response to an increase, stabilization or decrease in load. If I did overload, then according to HRV indicators it becomes easier to get out of the functional pit and understand when it is “already possible” to start increasing physical activity within the framework of a new cycle.

An example of my work with RMSSD at Engy Health

Below is an example of how I “read” my RMSSD chart. I am specifically giving an example that shows “how not to do it,” but this example is very indicative. On the graph on July 19, the date of my participation in GRUT T100 is marked, while in preparation for this start, 2 and 3 weeks before it, I ran training marathons (42.2 km each). This overload determined the RMSSD downtrend (in Figure Trend 1 ), indicating that I had no time to recover and the load was excessive. 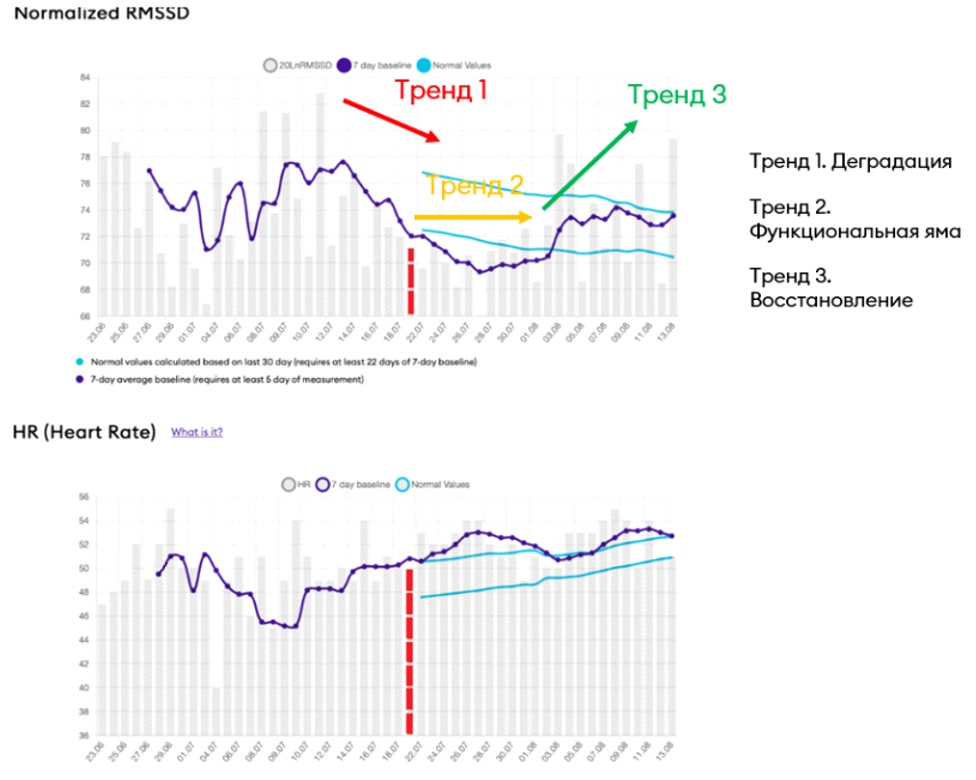 On the day of the 100-kilometer run (in fact, 108 km off-road) I did not get enough sleep. I kept the distance, but in the middle of the way I was “covered” four times - I moved to a step, because lacked the strength to maintain the running pace. All this led to a functional pit until the end of July ( Trend 2 ): I tracked my state both by my feelings (recovery is not a very pleasant process, accompanied by a constant feeling of weakness and lack of sleep), and by checking the variability data heart rate at Engy Health. During this period, I allowed myself exclusively restorative and tonic training.

Then the recovery began ( Trend 3 ): I returned to my channel on August 3, after which I decided that I could already restore my normal load and move on to developmental training.

Summary: what is the benefit of HRV with Engy Health?

Engy Health is a source of objective data about the state of your body. Many athletes focus solely on well-being, but this may not be enough:


Engy Health based on HRV (HRV) is a very convenient tool for athletes to self-diagnose overtraining and for coaches who need to remotely monitor the physiological state of students based on objective data and adjust their training plans.
Back


Subscribe to our newsletter with lifehacks and master classes

We use cookies for the best presentation of the site. By continuing to use this site, you agree to our use of cookies